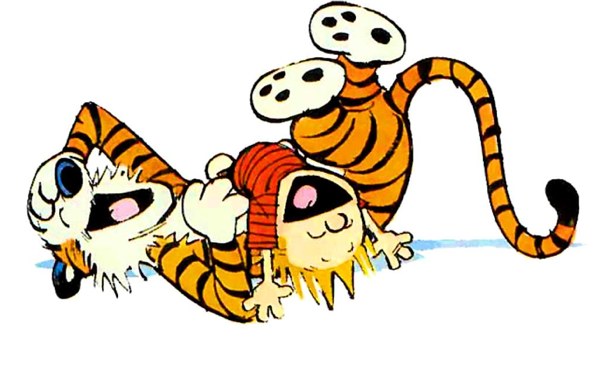 One of my favorite guides to understanding our students is Bertie Kingore’s breakdown of the traits of “gifted” and “high achieving” students. The traits in the “gifted” category always make me think of Calvin from Bill Watterson’s wonderful Calvin and Hobbes.

As a kid, I read Calvin and Hobbes religiously. Now, I read these same comics and see Calvin as the perfect introduction to the unexpected characteristics of many gifted students.

The tragedy of these traits is that, despite being rather common, they are often the very things that keep students from being identified and placed in a gifted program. And, yet, such a program is exactly what these children need.

This is why I love Calvin. He reminds us that when searching for gifted students, our criteria shouldn’t necessarily be compliance, great grades, or a strong work ethic.

Calvin’s intelligence is highly advanced, but, rather than being used for good, it supercharges typical bad behavior: 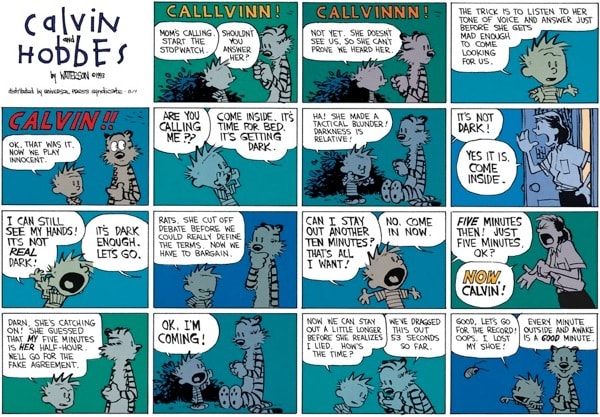 This kind of “intelligent misbehavior” could very well be a sign of a gifted kid who’s bored. A challenging, fast-paced classroom could make all the difference in his behavior.

Calvin has intense interests in preferred subjects, but is absolutely uninterested in the topics taught in school.

His research report on bats illustrates this perfectly:

If we’re looking only for a record of academic success, we might miss some of the most gifted kids in our schools.

Calvin’s development is strikingly uneven. His brain, emotions, and physical abilities are all out of whack. This is known as asynchrony and is common in our gifted learners.

Calvin’s poor physical abilities are an ongoing theme: he doesn’t like PE, he only enjoys the sport he invented, and endlessly struggles to ride a bike:

At the same time, Calvin displays his above-age-level intelligence in the realm of art (and experiences the resulting disdain from a “philistine”).

Further, Calvin’s sense of justice and morality is quite advanced, but he certainly can’t be considered emotionally mature.

Don’t expect gifted students’ to develop at an even rate. A young genius may very well be emotionally immature.

Calvin is the poster boy for the imaginational overexcitability. He doesn’t just like learning about insects or aliens, he becomes these things. Here’s Calvin as a plane, a dinosaur, an ant, and the intrepid Spaceman Spiff:

Calvin’s wild imagination gets him into endless trouble, especially since his “stories” are easily interpreted as lies.

In this series of strips, Calvin has “created” a duplicator which leads, in his mind, to several “Calvins” running around and causing havoc.

A vivid imaginary world and even a habit of stretching the truth might be unexpected clues that you’re looking at a gifted kid.

Despite his tendency for selfish behavior, Calvin has moments of surprising emotional depth. In this strip, he deals with deep moral issues:

But this could also lead to other emotional outbursts, such as frustration.

If you work with enough gifted kids, you’re sure to run into a real-life Calvin. And you’ll certainly see some of his characteristics in many of the students you work with. An authentic group of gifted students should have a wide mix of characteristics, not simply good grades and compliant behavior.

I'll send you an article specific to social and emotional needs every couple of weeks. For free! Learn More Here