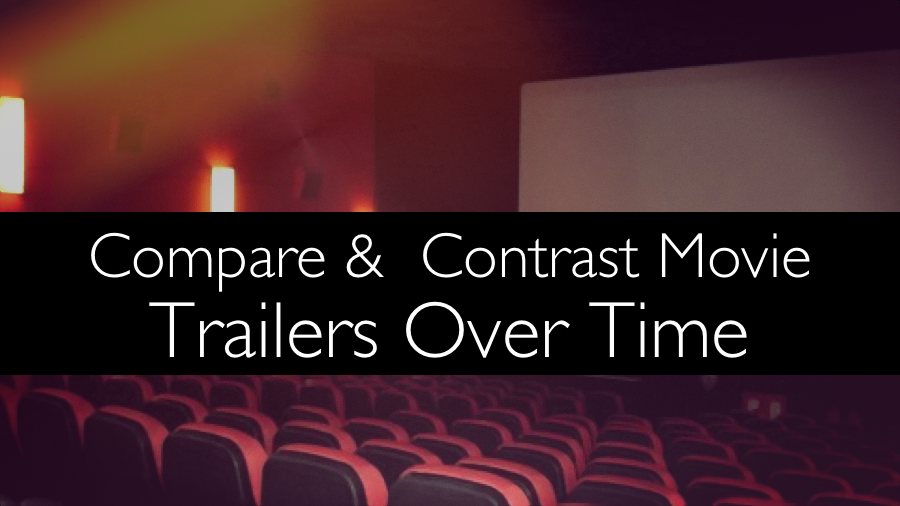 I go into a cold sweat when I see a comprehension skill like “compare and contrast” appear on the horizon. My gifted 6th graders will eat me alive if I give them a dull lesson about differences and similarities.

I’ve been collecting a sample of movie trailers over the decades ever since I stumbled across the theatrical trailer for Citizen Kane . I was absolutely taken aback by how strange it seemed. It made me start wondering how the relatively modern art form of the movie trailer has changed over time. Take a look…

To the modern eye, it’s quite a bizarre piece of work. In fact, it’s barely identifiable as a trailer. It’s like some pseudo-behind-the-scenes-documentary. Naturally, I began to wonder how I could use it in the classroom. I grabbed another classic movie’s trailer:

Here’s a movie made in 1977, and its trailer is barely watchable! In fact, it almost made me not want to watch Star Wars (and, believe me, I love Star Wars). It’s almost difficult to pick the worst of the narrator’s terrible lines (“This may all be happening right now?”).

In fact, that narrator really seems out of place to me. Perhaps I’m onto something interesting for my students to analyze. Let’s jump ahead a decade.

Back To The Future

1985’s Back To The Future begins to take the form of a modern trailer, but what has changed? I know that the narrator’s explanations of the action continues to throw me off. Why does this seem so strange? Let’s jump to the nineties.

Now that’s more like it! 1992’s Jurrasic Park seems to have the properties of a pretty current trailer. I do notice that the narrator is doing less narrating and the actors are taking over more of the explanation of the movie. Forward through time!

Lord of the Rings

Finally, 2001’s Fellowship of the Ring appears to be a fully modern movie trailer. Did you notice? No narrator. All “narration” is provided by characters’ actual dialog. And the editors have no problem using dialog from one scene while showing visuals from another scene.

How could you use this in class?

Well, it seems like a perfect way to up–level reading comprehension skills such as “noting details” or “compare and contrast.” Imagine showing each of these to your students, and asking for patterns or change over time. This activity would be highly inductive as students must create their own meaning from unrelated and uncategorized bits of information.