The prompts of depth and complexity are an incredible tool to begin differentiating learning objectives.

Teachers can quickly modify a lesson’s goal to increase the challenge by plugging in the depth and complexity prompts. But, I frequently see the prompts used at a mere surface level in classrooms.

In other words, you must know how to use Bloom’s Taxonomy before you can play with Depth and Complexity.

Sure, you can drop “patterns” into an objective to raise the level of the content, like so:

It’s Not Your Fault

I gave a talk about this problem and a program supervisor came up afterward, ashen-faced, and said, “I’ve been doing this wrong for ten years!”

But it’s such an easy trap to fall into because every example of Depth and Complexity I see is at the bottom of Bloom’s. There’s almost nothing out there that’s actually deep or complex!

Look at any of these charts and you’ll see this pattern: every question begins with “what…” 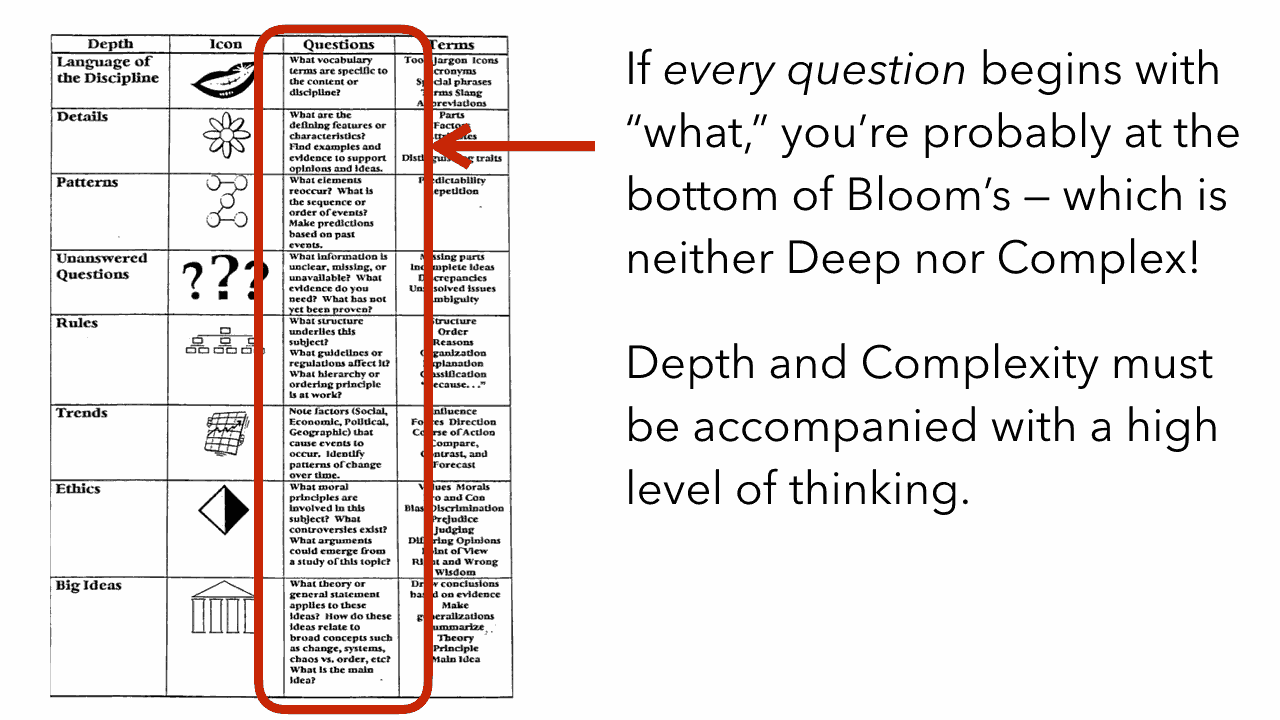 These low-level questions are an ok starting point, but please don’t stop here.

When planning a lesson, we can’t just differentiate content (which is what the prompts of depth and complexity do). We must also adjust the thinking that we expect students to do.

That’s bottom-of-the-barrel Blooms. Remember or identify. You can add all of the depth and complexity you want, but you’re still asking a low-level question.

Here, despite the seemingly low level of content (Dr. Seuss), we’ve pumped up both the content (by making it about the ethical use of power) and the thinking (evaluate; compare and contrast) so that it’s actually a pretty interesting question… even for older students. Heck, this would have been a fun question to tackle in college!

When writing an objective, we must increase the complexity of, not just the content, but also the thinking skill. 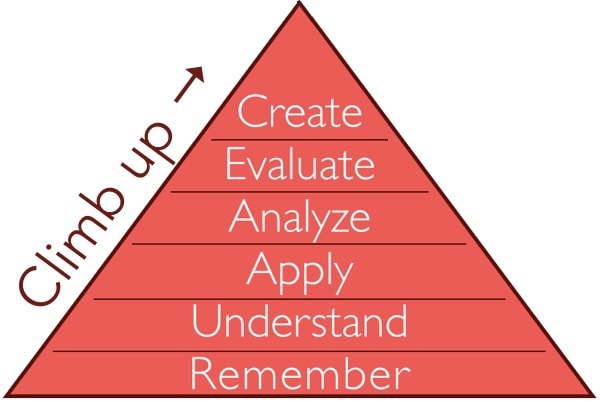 Instead of just asking kids to “identify” over and over, climb Bloom’s Taxonomy in combination with a prompt of depth and complexity. Here’s an example:

At each step, students are forced to think harder about the patterns they’ve uncovered. They’re no longer just “identifying.”

And notice how each step easily leads to a larger, more complex product.

At level one, a student could just write a sentence, but after that, the responses need to be bigger. Perhaps by the end, students are debating and creating skits.

Many years ago, I created The Differentiator, an interactive tool based on these ideas to help you modify the parts of a differentiated objective. Play around with it to see what a big difference the thinking skill can make!