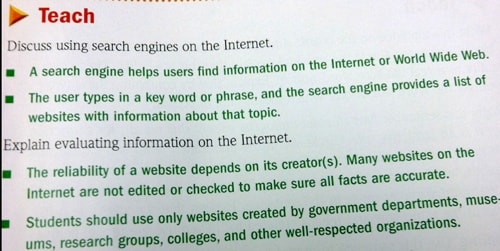 It’s obvious that students need instruction in online behavior and consequences. Unfortunately, we’re stuck with textbooks that feature “internet” lessons like the one seen above. We have to prepare our students for an online world that our curriculum isn’t even aware of.

Spend the initial lesson establishing the concept of reputation.

Ask students for definitions, then offer a dictionary definition: “The beliefs or opinions that are generally held about someone or something.”

Form a generalization: “Reputation is built on actions and survives over time.”

For example, Martin Luther King, Jr. has a reputation for bravery. He gained this reputation through the Montgomery Bus Boycott and the March On Washington.

Ask students to identify reputations of other historical figures. Require evidence that supports these reputations. Give them a list of character traits to promote specific word choice. You’ll need some resources for students to read. Simple Wikipedia is often great for this.

Form up trios and give students jobs like reader, writer, and presenter to keep groups running smoothly.

Some examples (with contemporary celebrities to spice things up!):

Now for the meat! Let’s connect reputation to the online world.

Begin with this Microsoft-sponsored survey:

75 percent of U.S. recruiters and human-resource professionals report that their companies require them to do online research about candidates, and many use a range of sites when scrutinizing applicants — including search engines, social-networking sites, photo- and video-sharing sites, personal Web sites and blogs, Twitter and online-gaming sites.

Break this down with your students. Most companies use the internet to learn about potential employee’s online reputations. The kicker?

Seventy percent of U.S. recruiters report that they have rejected candidates because of information found online

Discuss, and then continue with this New York Times article on cyberbullying:

Girls from Benjamin Franklin reflected about their cyberdramas: “We had so many fights in seventh grade,” one girl said. “None of them were face-to-face. We were too afraid.” … Another concurred. “It’s easier to fight online, because you feel more brave and in control,” she said. “On Facebook, you can be as mean as you want.”

A Facebook page had sprung up about the man’s son, who was new in town… nearly 50 children piled on, many of them readily identifiable.

Discuss how easy it is to develop a poor online reputation. Bring it back to the Microsoft study: people will see our actions, and the consequences are severe!

Hopefully someone will point out that one could just delete incriminating evidence. Tell them to stay tuned for tomorrow!

Ask your class: can we delete online actions?

Oh. How do we know things online are really deleted?

The fact is, we don’t know. We trust Facebook and the rest that our data is really gone. But guess what?

CNN reported that photos “deleted” in 2009 were still accessible on Facebook in 2012.

When we first investigated this phenomenon in 2009, we discovered that photos “deleted” from Facebook seemingly never go away if you have a direct link to the image file on Facebook’s servers.

I reached out to Facebook once again, looking for an answer as to why this is still going on nearly three years after the company first promised it was “working” on the issue.

This information should shock your students. A clean reputation is not just a click away.

Now show The Wayback Machine to your class. This site saves webpages over time as an act of historical preservation… even if we don’t want them preserved!

Here are some funny examples to share that reinforce that the internet never forgets:

This evidence should work to open students’ eyes that internet activities are more permanent than we realize. Our online actions should be carefully considered – even more so than offline actions, which are rarely recorded in such detail.

Day Four: Back To Historical Figures

Finally, consider how great historical figures would use the internet if they had access in their time. Bring Martin Luther King, Jr. back as an example. With a reputation for bravery and a passion for equality, how would he use modern internet services?

To connect with Presidents’ Day, I used several US presidents as our subjects. I gathered information on a dozen presidents (using this book). Trios chose one and went through the packet using the same jobs from earlier.

They noted the president’s reputation and actions that led to his reputation. Then they brainstormed potential online activities for their president. Finally, groups presented their rather insightful ideas.

I used this procedure as an entry point to our own class website. It also tied in nicely with a holiday and, most importantly, brought to light the importance of maintaining a good reputation even when online.