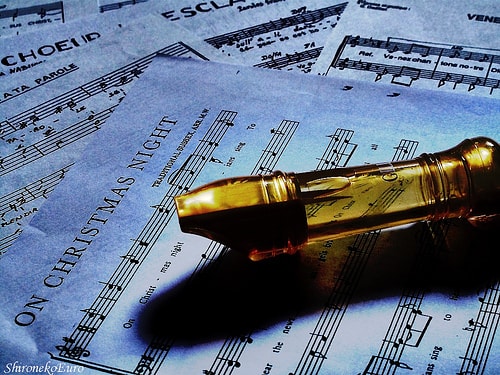 After I showed my class the zoetrope I discovered at Disneyland, I had a student bring in her own zoetrope that she constructed at home.

It wasn’t an assignment. It wasn’t for extra credit. She just took an interest in the idea and spent some time diving deeper on her own.

Many of my students are like this. Give them a little taste of something, and they go racing off to learn more about it.

Taking Silent Reading Up A Notch

After recess, my students have a ten minute chunk of time to read a book and listen to some relaxing music. This serves as a “settle down” period as well as a time for me to check homework or finish up other administrative tasks.

Why not add in a way to expose students to something interesting as well?

Load up a computer or an iPod with some important music. Yes, important is subjective. No, it doesn’t (have to) mean classical. While they’re reading and listening, throw some information about the artist onto the overhead screen.

This takes dull background music and gives it a new dimension.

I love Vivaldi’s Four Seasons. I bet students would be more interested in listening if I included a picture of ol’ Antonio and explained about the concept of representing the seasons. I bet quite a few of them would starting chatting about which season they think the current track represents.

I play Miles Davis’ Kind of Blue during this time as well. Do students know that Miles Davis pioneered several genres or that he was inducted in the Rock ‘n Roll hall of fame? He created music that infuriated and confused people yet also recorded the best selling jazz album of all time.

Perhaps make an “artist of the week” so students have several days to hear the artist’s range of styles. ﻿I can see Beatles week beginning with “Love Me Do” and ending Friday with Abbey Road.

Is this going to directly raise their state testing scores? Nope. But I bet at least one student will take the experience and run with it, exploring the artist in more depth at home or bringing in a similar CD they bought over the weekend. You might even influence an emerging musician. Not bad for silent reading.