Earlier I posted a list of sources for math data to use with your gifted students. Here’s an example of how my class will be practicing percentages using some real data (inspired by the amazing math work by Dan Meyer).

The post “Should I Have Bought That Apple Product” provides some outstanding information regarding the price of Apple products and the increase in Apple stock. For example, if you bought an original iPhone in January of 2007, you dropped $499. If you bought Apple stock instead, that stock would be worth $1,460 or an increase of about 293%!

Again, borrowing from Dan Meyer’s rules for creating an intriguing and challenging problem, I begin with a visual of the original iPod (courtesy of Wikipedia) and throw out a bunch of questions to get the class talking. 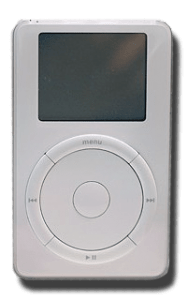 “Let’s say that instead of buying this iPod, you spent the same amount of money on Apple stock. How much would that stock be worth now?”

I then open up a round of inquiry (using the language of Melanie Montgomery’s Math Icons). During this time, students get thirty seconds to consider what information they need. Then I answer as many of those questions as I feel necessary. In this case, I’ll answer the following questions (oh, and I try to answer them all visually – I used screenshots from Yahoo’s finance webpage for example):

I then allow students to partner up and take a crack at the big question. Why partners?

I’m also emphasizing organization of work in these activities. If their work requires any interpretation on my part, I send them back to relabel, restructure, and reorganize. Students are using the depth and complexity.

We wrap it back up at the end and see who got the closest to the correct percentage. I’ll ask for some of the 6th grade skills students used to answer the question. We talk through their thinking a bunch too.

It’s always fun to leave them with a question (perhaps an assignment for home?). In this case, I uncovered an ebay auction selling a first generation iPod (new in box!). It sold for $325. Students then determined the percent that they would have lost by selling the iPod. Students could also investigate the percent difference between the stock option and the iPod’s