The Byrdseed.TV registration window closes in less than a week! Check it out. 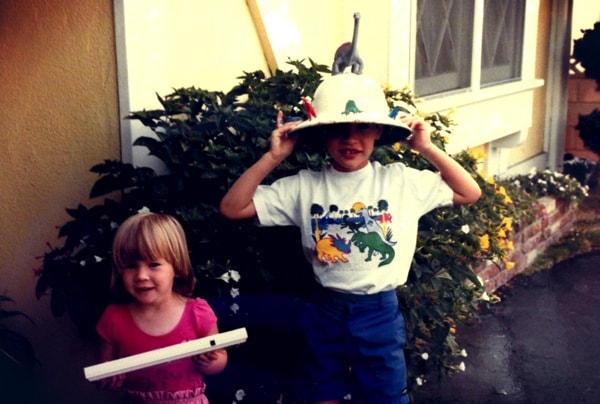 That’s me in kindergarten wearing a safari hat decorated with plastic dinosaurs along with a dinosaur t-shirt.

In my childhood, I could not know enough about dinosaurs.

I devoured my dinosaur encyclopedia. I videotaped all the dinosaur shows on TV. I debated with other 6-year-olds over incorrect classifications (no, Dimetrodon was not a dinosaur, Neil). I read every dinosaur book at the library.

Overly Excited by an Idea

Only later in life did I learn about Dabrowski’s five overexcitabilities. My dinosaur obsession would definitely qualify as an “intellectual intensity.”

An intellectual overexcitability is associated with striving for knowledge and truth through questioning, discovering, and analyzing, but it is not the same as intelligence, which is seen as an ability. Anne N. Rinn’s Overexcitabilities and the Gifted Child

It’s odd to think about a kid becoming “overexcited” by an idea. Yet, if Wikipedia had been within my grasp as a child, I could easily imagine myself spinning out of control, simply overwhelmed by information.

When A Common Interest Becomes A Problem

You’ve probably already thought of several students you know who are obsessed with an idea.

It’s worth noting how this deep interest in a topic can backfire, making it tricky to find friends. Now, obviously, if an eight-year-old is into heart surgery, yeah, no one her age is going to want to talk about it. But this can be a problem even when all the other kids love the same topic!

I mentioned before that, in kindergarten, I’d get into arguments about dinosaurs with other kids. Sure, they liked dinosaurs, but I LOVED dinosaurs. They’d make mistakes: getting names mixed up, mispronouncing time periods, labeling animals “dinosaurs” that were not (in fact) dinosaurs. My intense interest in dinosaurs made it hard to talk about dinosaurs with kids my age.

I already see the same thing happening with my kid. This four-year-old is SO deep into Star Wars, that he can only talk to adult Star Wars fans. They’re the only ones who can keep up! And god help you if you mix up two characters or say a planet’s name wrong. You’ll get tears! Other four-year-olds cannot hold a Star Wars conversation with my four-year=old. (He literally said that he doesn’t want to see one friend anymore because, “he doesn’t know enough about Star Wars”).

Common interests can be a problem when one kid is intensely interested and no one else is.

Going Beyond The Age Group

This is one reason that kids can really benefit from multi-age environments. If, as a kindergartener, I could have chatted it up with older dinosaur enthusiasts, I would have found actual friends! When my son finds someone who can tell the difference between Tatooine and Jakku, he’s made a friend!

I was lucky, as a first grader, to end up in a first-through-third gifted magnet class. I now know that my parents were quite nervous about me being around such big kids, but it was awesome. I made friends who not only shared my interest but shared the depth of my interest. I occasionally got to outshine the third graders. I often learned from them.

So, as a teacher, look for chances to partner up beyond grade levels. My sixth-graders always cited our “kindergarten buddy” time as a favorite part of the year.

As a parent, find opportunities for your kids to hang out with a variety of age groups – including the elderly. Oh, would kindergarten Ian have loved to chat with a retired paleontologist!