My favorite book on writing is On Writing Well from William Zinsser. In it, he hammers on the necessity for simple and clear writing.

We can always make our writing (and speaking) better by taking words out, using words everyone understands, and simplifying sentences. The end result is that shorter communication is often better because it’s clearer.

“Jargon” are the special words used within a profession. I’m sure you’d agree that education is bogged down with jargon. Jargon is the opposite of clear communication. Jargon is unclear because it’s never defined. Even insiders who use it don’t really know what jargon means.

A consultant working with a group of executives recounts an anecdote about the dangers of jargon:

He asked a team of 15 executives what “optimization” means. He received seven different definitions. The most troubling part was that the company was a price optimization software company.

We have a jargon problem in education. Ask 15 colleagues to define a popular jargon-y word in your district. Perhaps: 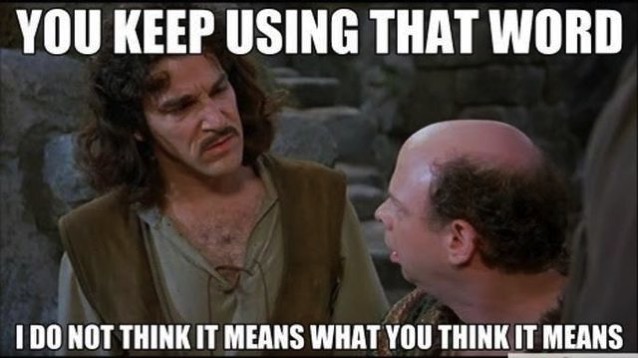 The next time someone mentions “RTI” (as an example of trendy edu-jargon) act as if you’ve never heard the term. Ask what it means. I bet you $1 that, rather than a definition, they’ll say that it means “Response to Intervention.”

But that’s not a definition! It’s just the acronym expanded out. Push on! “Sorry, pretend I’m new here. What does ‘Response to Intervention’ mean, exactly?”

I do this whenever I get jargon-y email. People really struggle to explain what acronyms really mean.

(Update: this exact thing just happened to me at a conference! I joked that no one knows what RTI actually means and this person, with great vigor, yelled, “Response To Intervention”. I had to chuckle.)

So Many Words, So Little Meaning

Since I truly don’t know what RTI means (it became trendy just as I quit my teaching job), I looked it up.

Here’s a definition from the “RTI Action Network” (which sounds like a 1980s cable channel):

RTI is a multi-tier approach to the early identification and support of students with learning and behavior needs.

Not a great start! Don’t schools already identify and support students-in-need? How is this different from a basic function of a school? They continue:

The RTI process begins with high-quality instruction and universal screening of all children in the general education classroom. Struggling learners are provided with interventions at increasing levels of intensity to accelerate their rate of learning. These services may be provided by a variety of personnel, including general education teachers, special educators, and specialists. Progress is closely monitored to assess both the learning rate and level of performance of individual students. Educational decisions about the intensity and duration of interventions are based on individual student response to instruction. RTI is designed for use when making decisions in both general education and special education, creating a well-integrated system of instruction and intervention guided by child outcome data.

Folks, that’s 133 words and I’m less clear about RTI than I was before I read it.

Here’s the State of Washington’s attempt at a definition:

Response to Intervention (RTI) is a school-based, multi-level prevention system to maximize student achievement and reduce behavior problems. With RTI, schools identify students at risk for poor learning outcomes, monitor student progress, provide evidence-based interventions and adjust the intensity and nature of those interventions depending on a student’s responsiveness.

They actually wrote “school-based, multi-level prevention system” as if that phrase has any meaning.

And the Center on RTI:

Response to intervention (RTI) and multi-tiered systems of support (MTSS) integrates assessment and intervention within a multi‐level prevention system to maximize student achievement and reduce behavior problems. With MTSS/RTI, schools use data to identify students at risk for poor learning outcomes, monitor student progress, provide evidence‐based interventions and adjust the intensity and nature of those interventions depending on a student’s responsiveness, and identify students with learning disabilities or other disabilities. The four essential components of an MTSS/RTI framework are screening, progress monitoring, multi-level or multi-tier prevention system, and data-based decision making.

That’s a lot of words with very little meaning.

From On Writing Well:

“Clear thinking becomes clear writing; one can’t exist without the other.”

What does it say about the understanding of jargon if every definition is a pile of meaningless mush? If we can’t clearly and simply define a term like RTI, how can we possibly implement it well? How can it possibly benefit students? How can we possibly communicate with parents?

What Does “Gifted” Mean?

Again, not picking on RTI here. Replace it with whatever edu-jargon you’d like.

Heck, I’ve been in gifted education for a decade and couldn’t clearly define “gifted” for most of it. But I don’t feel too bad because even the National Association for Gifted Children can’t do it:

Children are gifted when their ability is significantly above the norm for their age. Giftedness may manifest in one or more domains such as; intellectual, creative, artistic, leadership, or in a specific academic field such as language arts, mathematics or science.

Phrases like “above the norm” and “may manifest in one or more domains” are pure fluff.

Compare that to this sentence: “Gifted students are so intelligent that they need to be taught differently in order to learn.”

Is it perfect? Probably not. But at least it’s clear! At least it says something. Compare it to the jargon-mania in each US state’s definition of “gifted”.

The Emperor Is Naked And You Must Point It Out!

It’s an Emperor’s New Clothes situation. No one wants to be the one to point out the obvious. No one wants to stand up and say, “I know we use this word in every meeting, but I need someone to explain what it means to me.”

I think you’ll find that this is more difficult than it seems and often the person who’s most fired up about the jargon can’t explain it at all.