The Byrdseed.TV registration window closes in 5 days! Check it out. 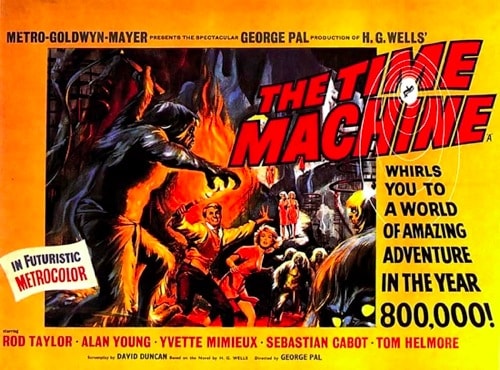 I have a class set of HG Wells’ The Time Machine. It was easily affordable, a classic of the genre, and a well-known title because of its recent movie adaptation.

The problem? It was written in the late 19th century in England and is simply above most of my students’ (admittedly high) independent reading levels.

However, this book was definitely within their instructional reading level, so I turned this lit study into a read–aloud. I read the book out loud (with several selected edits) to my gifted 6th graders over the course of two months.

Here were some of the amazing benefits…

Exposure To An Important Author

Students learned about a science-fiction pioneer who created War of the Worlds and The Invisible Man. Wells even coined the term “time machine.”

The concept of traveling through time opened up heady discussions about paradoxes. Can you change the past? What does that do to the present? What if you killed your own grandfather!?

We discussed other famous works with parallel themes:

In Back To The Future, Marty must travel back in time and help his parents fall in love… only his mom develops a crush on him!

Learn a lesson about the present

There are numerous accounts of time travelers going back to stop a terrible event. In The Twilight Zone episode Back There, a man attempts to stop Lincoln’s assassination, with surprising consequences.

These fascinating themes open up some great creative writing options.

After finishing the novel, we the watched the 1960 film version of The Time Machine.

Students were aghast at the strange changes. In the book, the Time Traveler jumps directly to the year 802,701. However, in the film, he stops off at both World Wars, then experiences a 1966 atomic attack on London, then finally jumps to 802,701.

Why would the filmmakers change the story in such a strange way?

We discussed the concept that creators’ own time period influences their work. War was on the mind of people in the late 50s. Naturally, their movie was shaped by this influence.

HG Wells, however, was influenced by the events of the late 19th century in England. His story commented on the effects of communism, technology, and the emerging “easy life.”

This set up an avenue for analysis: how do authors’ own experiences affect their writing? We could spend months on a big, juicy idea like this, and there’s no way the anemic selections from our anthology could support such a discussion.

The film’s effects are humorous to our eyes, but won an oscar in their day. Buildings grow and fall, plants wither and are reborn, the sun swiftly flies across the sky. The evolution of fashion is shown via a department store window’s mannequin.

I asked students to group up and develop a scene to show the world changing through stop motion.

I bought $20 worth of green fabric to serve as a green screen.

They used technology such as:

Once they made their clip, iMovie provides simple drag and drop green screen removal.

Naturally, students can create their own soundtrack. Our lab has Garageband on the computers, which integrates beautifully with iMovie. And publishing the movie is a snap by exporting to a movie hosting site like YouTube or burning DVDs.

We’re still working on it, so a sample is on its way :)

Taking On The Challenge

Rarely do I see my class confounded by a story. It was awesome to really work through this book with them and take them to a level beyond their independent ability.

Try a tough book with your group and see what happens!

Don't have time to create differentiated lessons? Byrdseed.TV is packed with pre-made resources to save you time (and delight your students). The current registration window closes on Jan 24th.