I like to start any introduction of Depth and Complexity by partnering Big Idea and Details. I pair them because of their natural interplay.

If you’re emoji to represent the depth and complexity icons it’s pretty natural to use: 🏛️ for Big Idea and 🌻 for Details.

When asking students to think about the Big Idea of a topic, we’re looking for a statement that sums up the content.

Big Idea might also prompt students to think about the purpose of a topic. What’s the Big Idea of a school or a family? A Big Idea might be a motto or a saying.

You could ask students to identify the 🏛️ Big Idea of:

Students’ answers will vary depending on their own sophistication. One student might see the Big Idea of the Constitution as “the rules of the United States,” but another might say that it’s “a tool to protect citizens from their leaders.” Both can be correct if justified with evidence (and the evidence is represented by the 🌻 Details prompt).

When applied to a person, the 🏛️ Big Idea might sum up their life’s accomplishments, their personality, or their purpose. What’s the Big Idea of Martin Luther King? How about Luke Skywalker? Cleopatra? How are all of these Big Ideas similar? (Note: I want to move up from mere “identify” questions, so I followed up with a “compare” question).

The Big Idea of Where the Red Fern Grows could be as simple as a summary of the plot, but it could also be the story’s theme or moral, or the author’s purpose.

Big Ideas can get even more abstract. We can take them beyond one topic. For example, the Big Idea 🏛️ “Growing up requires sacrifice” could be found in many stories, films, and historical contexts. We can use the Big Idea to connect within and across disciplines.

While students should definitely be coming up with their own Big Ideas, you should also offer your own for them to consider. Your Big Ideas will challenge their thinking and force new connections.

The whole purpose of depth and complexity is to push your most advanced students’ understanding of the topic.

Note that both of the ✅ quality Big Ideas require evidence. I’m dying to hear students’ reasons! And that evidence will come in the form of our next prompt: 🌻 Details.

So, in summary, do not allow your students to turn in trivial or obvious Big Ideas! Advanced students should be given you advanced ideas.

If the Big Idea is all about the main point, Details prompts students to look for the most important pieces of a topic.

Details isn’t about every single detail, of course, only the most important. You could begin your introduction by discussing the difference between Essential and Inessential Details.

If we say “George Washington was a president who faced difficult decisions,” obviously we need some Details to prove that Big Idea true. 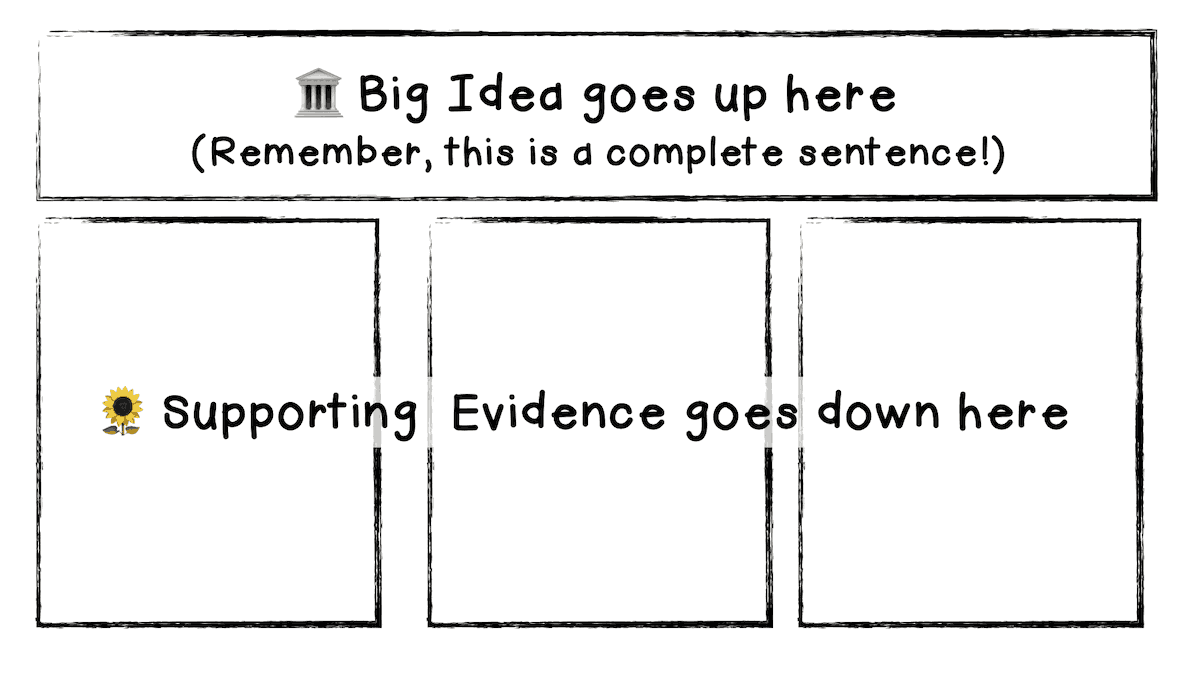 The 🏛️ Big Idea’s icon looks like a Greek temple and is itself a useful graphic organizer (yes, Depth and Complexity pairs beautifully with graphic organizers). This shape shows the relationship between Details and Big Ideas. The roof holds the Big Idea and the structure below holds Details that support the Big Idea. 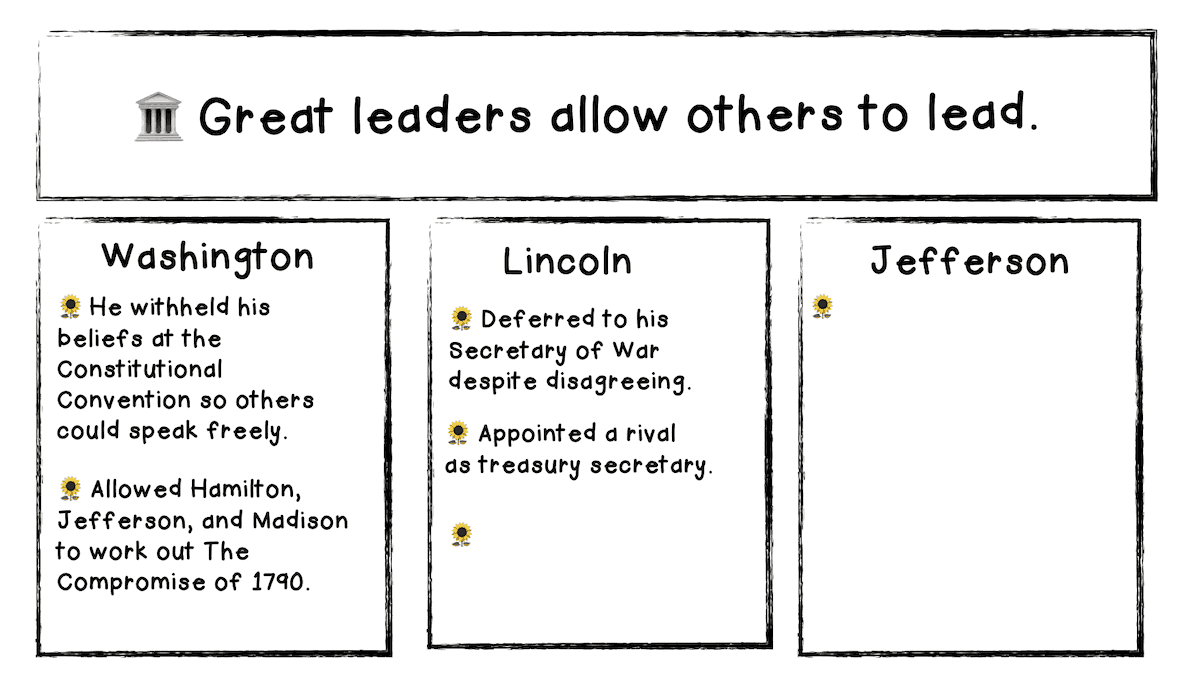 This emhpasizes that a Big Idea requires a certain amount of evidence to hold it up. Only one column is going to make a pretty weak structure. Three, four, or five columns are a minimum to hold up that roof. 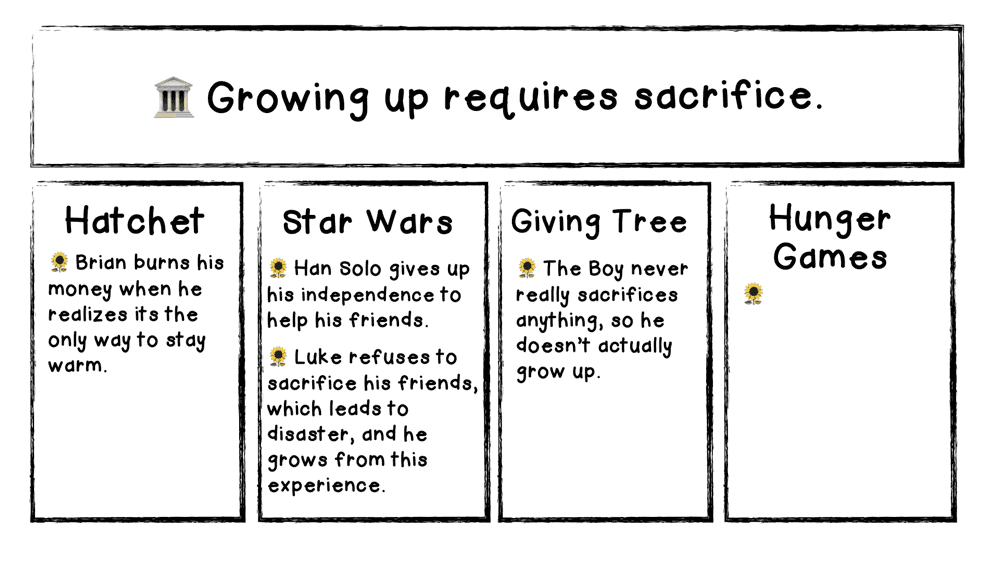 For a slightly more advanced way of thinking, each column could represent a category of Details from a particular story, a unit, a person, etc. This is a simple way to get students thinking across multiple content areas. 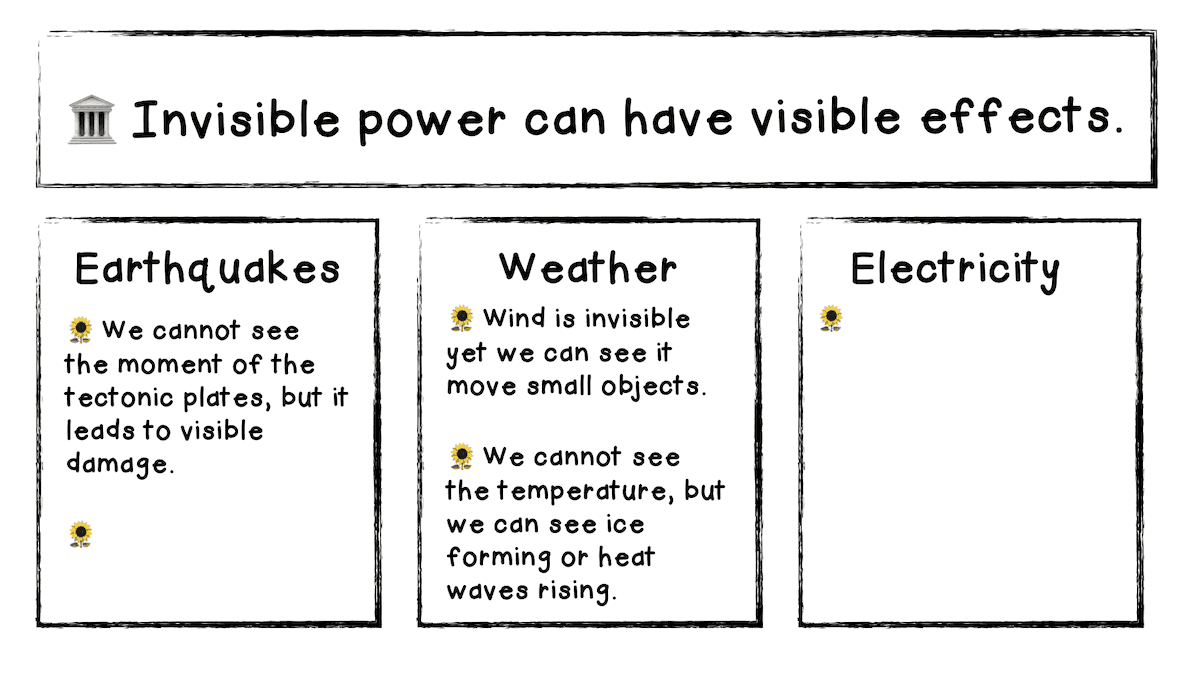 I once based my whole science curriculum around the statement 🏛️ “Invisible power can have visible effects.” It was awesome!

However, don’t let this graphic organizer be the final product. Your students’ thinking should lead to a written response, a presentation, a skit, or some other complete work.

Here are three introductory ideas for incorporating Big Ideas and Details into a task:

In each case, students can use the Big Idea Graphic Organizer to organize their thinking, although the organizer certainly doesn’t need to be the final product.