One of the things I would do with the Puzzlements I collected was to ask my students to create generalizations about the image/video/article.

A generalization is an abstract statement that can apply to many different situations. If you use depth and complexity, it’s a 🏛️ Big Idea. I wrote a bunch about generalizations and abstract ideas here.

They might come directly from the Depth and Complexity framework, they might be mottos, they might be quotes, but they’ll always be abstract enough to fit many situations, but not so vague as to fit every situation.

One method for creating a statement like this is to combine two prompts of Depth and Complexity into a sentence.

What kind of a statement could I make using ⚖️ Ethics and 🚦 Rules? One of my favorites that I came up with is:

You can probably make a huge list of situations where someone has crafted a new law to solve some problem, but that law then led to new problems. Show this statement to students and they’ll have a dozen examples for you just from school!

But, using those same two thinking tools (⚖️ and 🚦), I could also write:

Now, I was coming up with those off the top of my head, but consider giving your students a starting point, like an image, video, or article. Again, I’d use something from my own Puzzlements mailer or a Notice Wonder image over at Byrdseed.TV.

Then, in response, my students would combine two prompts (their choice!) from Depth and Complexity into a statement.

As I watch that, it might lead me to write one of these statements:

Of course, this takes practice, modeling, and scaffolding. Your students will need guidance here. Once they get into the groove, though, they will surprise you with their thinking!

Once you have a big idea, you can use this like you would with any of the generalizations from the Depth and Complexity framework.

I’d have my students pop their new generalization into the top of a graphic organizer and then look for evidence that supports that statement from different areas. This would be an example of deductive thinking.

Here’s a sample I cooked up using one of my statements from above and the three categories: school, sports, and video games. 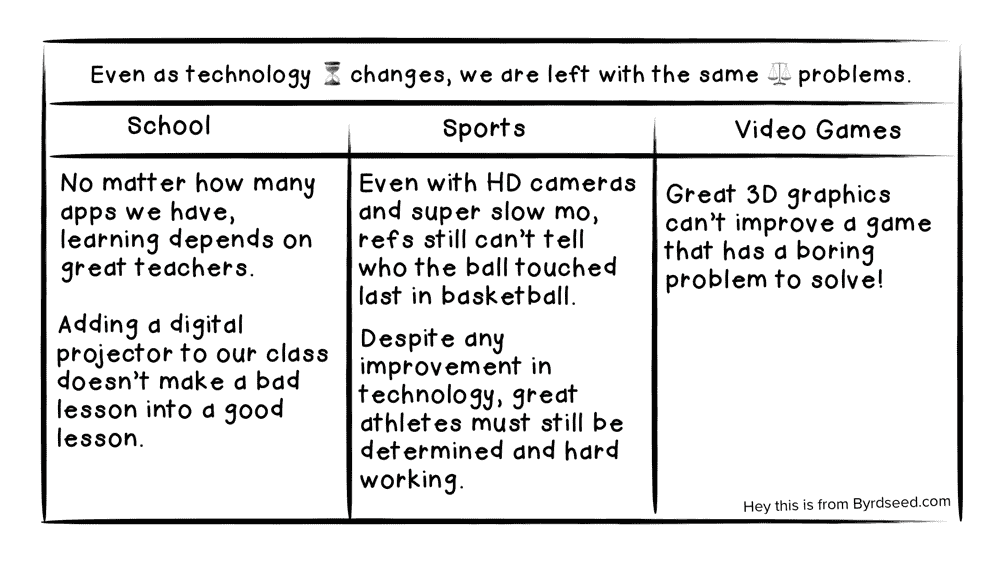 You could do the same, but label your columns:

You could just make two columns: proof and counterexamples. Now kids look for evidence that supports the big idea and evidence that refutes it.

Want to turn it into a larger product? Have kids write a short essay, give presentations, or teach the 2nd graders about their big idea.

And, of course, keep bringing these big ideas back throughout the year. You’ll find more and more uses for them.

For more ideas, read about the original Puzzlement, where I explain how my students created generalizations about this fascinating animated sculpture.