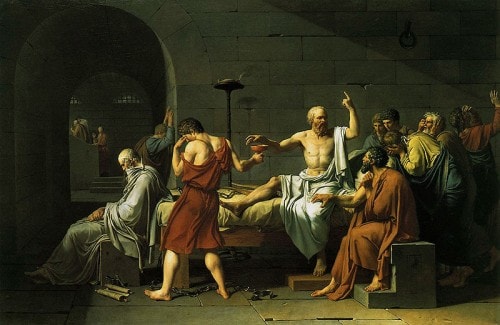 No one can deny that our gifted students have great power. They may be intellectual powerhouses, grasping concepts years ahead of peers. They may be emotionally sensitive, becoming aware of issues such as mortality at an early age. They may be leaders of people, showing leadership qualities from the very beginning.

I first read about Kohlberg when reading Rafe Esquith’s books

. Kohlberg suggested six stages in the development of a person’s morality.

These levels are a fantastic way to discuss students’ motivations and help them to see how their thinking compares to others.

I actually began by discussing philosophers such as Socrates and Plato. I printed out a couple images of them (from Wikipedia) and quotes regarding morality. I showed my students a copy of the painting Death of Socrates. We discussed how Socrates chose to drink hemlock and die rather than escape from prison or deny his own teaching. This painting provides a great starting point to discuss motivations and responsibilities.

I then introduced a situation with a moral decision:

There’s a person at school with a copy of an upcoming test.

I asked for some possible actions and we settled on “telling the person to stop.”

Then we began brainstorming why someone would tell that person to stop.

Next, I asked students to consider which motivations were most selfish and which were the most honorable. We discussed the idea that an action can have different motivations with different levels of morality.

Running Through The Halls

I then introduced the levels of morality as developed by Kohlberg, illustrating them with the idea of running through the halls at school.

A day or two discussing morality isn’t going to be a magic pill. It must become part of your class culture. Students must use it in their daily interactions with each other (just wait until students start pointing out each others’ low levels of morality – then you’ve got a whole new issue to deal with!).

My master teacher utilized a weekly “class meeting” in which students discussed ways to improve their classroom. This meeting was completely student run, with the teacher sitting in the back and intervening only when necessary. I now see that these students were working at a level five morality at least once a week.

Equipping students with an understanding of social responsibility is no easy task, but a half hour a week may be enough to set them along the right road. Consider incorporating projects that encourage students to “become part of the process” and solve authentic problems.