I read about Norway’s remarkable dominance of the winter Olympics, despite its rather small population, and it piqued my interest:

With only five million people, it has won 303 winter Olympic medals, far more than any other country on the planet. To find a country smaller than world-leading Norway…, you have to travel down to Croatia, which ranks 24th with 11 medals. How Norway Scores So Much Olympic Gold, Wall Street Journal

I love this juxtaposition of unexpected data! Let’s turn it into a math project.

As I’ve written before, when building a math project, I try to consider these four items, it always pushes the project from good to great:

The Wall Street Journal article provided a great start for the intriguing conflict:

Of course, the internet has us covered for all of this data:

Use this data in any way that fits your students’ needs. Possibilities include:

And everyone should be analyzing the data they generate to look for patterns. Kids should form generalizations about size vs medal count, summer vs winter performance, medals vs economics, etc.

A bonus application for all ages is to use a spreadsheet to track data, make calculations, and create graphs. Doing this takes the emphasis away from repetitive calculations (which can become tedious) and places it on analysis (which is creative and exciting).

We’re really working with pure statistics here, so perhaps our students take on the role of a statistician, looking for hidden patterns underneath the data. A natural technique for this expert is to take raw data and graph it, visually spotting interesting trends.

The product can be as simple as a series of graphs, either on graph paper or created in a spreadsheet. And, of course, we’d want to see some written analysis: “What hidden patterns did you uncover?”

Here are a few sample graphs I made to whet your appetite. 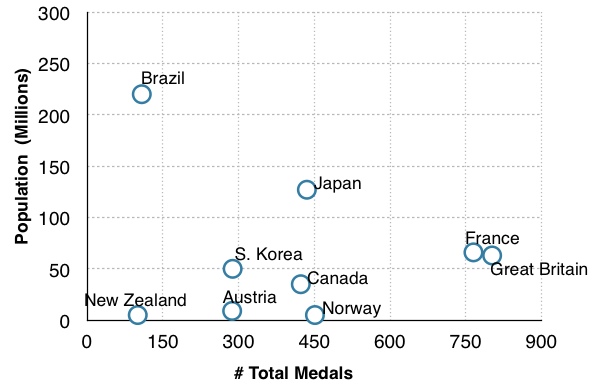 The fun part is analyzing the results. By graphing the information, we get some cool patterns that would otherwise have been invisible. For example:

I also graphed summer vs winter totals and overlaid a rough “temperature gradient” to show each country’s seasonal dominance: 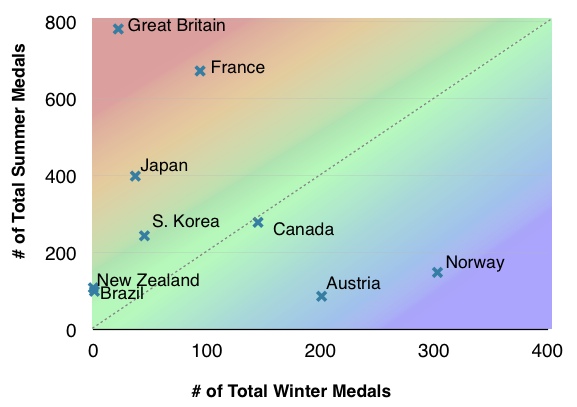 If your students are older, have them calculate ratios. Perhaps total medals per million people?

And of course there’s no reason not to graph these ratios as well! 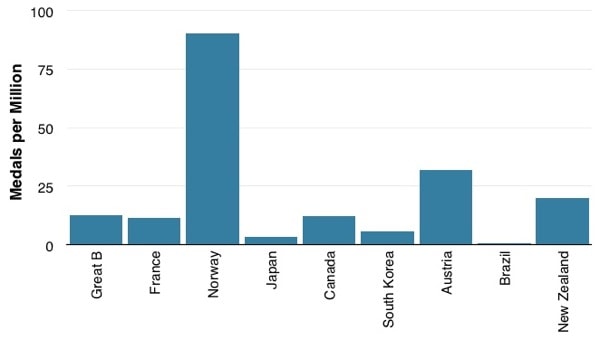 It’s fun to let kids select their own countries to analyze (probably no more than ten), but beware of countries like the US, China, or India whose medal counts or populations absolutely destroy the graphs’ scales. Unless, of course, that’s the point of the lesson (perhaps you’re teaching logarithmic scales?).

Please let me know what you do with this and what your students come up with!

Math projects that cross disciplines, brain-busting math curiosities, and differentiated lessons that will get your students thinking. Byrdseed.TV's registration window is now open. Check out the Byrdseed.TV Math Archives!