Discussing types of conflict is a great first step towards building a strong narrative.

Although the term conjures up images of ninja battles for many of our students, conflict can take on many more sophisticated forms than physical fights.

These images from The Incredibles visually represent a range of conflicts:

Here Mr. Incredible is involved in physical conflict with his boss. 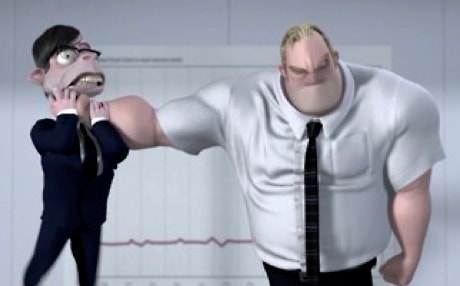 This image shows an emotional conflict between the two characters.

And here is Mr. Incredible in an environment that is causing conflict. 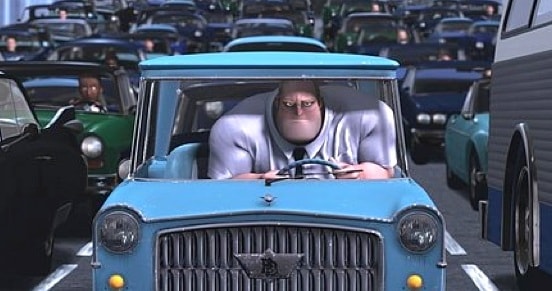 After discussing various ways we might feel conflict, you can formalize four types of conflict found in narrative writing. Keeping this number small reinforces an easy structure for students to follow as they build a story.

With character vs character conflict, two characters’ disagreements result in emotional and even physical conflict. It’s extremely common in stories from Seuss to Shakespeare.

A complex story has many layers of character vs character conflict. Harry Potter’s ultimate antagonist is Voldemort, but he has conflict with Professor Snape, his aunt and uncle, and even Ron and Hermione. Reinforce with students that conflict between characters does not have to mean a big physical fight.

Perhaps a character has no conflict with others but is instead struggling against nature. This could involve a natural disaster, a fire in the home, or a day at the beach gone bad!

Characters might have a struggle against not just one person, but against the rules of their society. It’s easy to think of Martin Luther King fighting for civil rights, but struggles against society are also rich sources for conflict in stories.

Finally, we have the most essential conflict in a high-quality story. The character must have some conflict within themselves. They must doubt their abilities, suffer setbacks, and worry about outcomes so that they can rise above it all. All of the characters from all of our previous examples exhibit character vs self. This is a required conflict for narrative writing.

At some point, students will notice that stories can have multiple types of conflict. Since we’re writing short stories rather than novels, I’d limit my students to two types. They must choose character vs self and then may choose one from the other three.

There are certainly other types of conflict you can introduce to your students. When studying myths, fate is a common source of conflict. Characters might have conflict with the supernatural. In a recent workshop, a teacher mentioned time constraints as a common conflict character must deal with. Feel free to add and remove when you present this idea to your students, but I think a small number of choices is important to help kids get started.