We’re continuing our journey through a writing unit focused on the patterns of great writing. This lesson, number three in the series, covers commonly used themes. These lessons assume an understanding of the depth and complexity icons as well as the content imperatives.

Students will categorize stories according to a repeating pattern of themes using a variety of films, novels, short stories, and video games.

Ask students if they have ever heard of a story where someone begins as a good person, is corrupted, and then returns to good at the end? Solicit examples of stories with this patter. Allow a lot of thinking time as your students make connections.

After you’ve some examples, explain that these stories all share a similar “big idea” or theme. In particular, this theme is known as “a fall from grace” and “redemption.”

There are only a few themes authors choose from and they are repeated throughout history. This is another example of the generalization “structure increases creativity” in writing. Authors pick a theme and then build creatively around it.

My 6th graders are fluent with the idea of an “author’s message,” so I don’t spend too much time definining “theme.” The introductory hook is typically enough. With younger students, you may need to introduce this concept (perhaps as its own lesson). Explain that a theme is the big idea that the author is exploring in his writing. It is not stated directly in the writing, but instead we must infer the theme based on evidence.

Let’s look at some common themes that authors use (as you are defining these terms, be sure to allow student participation. They will make connections to stories that you may be unfamiliar with. Encourage this since they are constructing meanining):

The Quest or The Journey

Definition: The protagonist is on a mission to find a place, a person, or an item. During the journey, the main character experiences a change over time.

Coming of Age/Loss of Innocence

Definition A character grows up and loses their childish ways. This may mean taking on new responsibilities or realizing that something isn’t important. The loss of innocence theme has a more negative view of this transformation while a coming of age story is positive.

Stranger In A Strange Land or Alienation

DefinitionA character is put in a place in which he feels alone and out of place. During this time, the character learns about himself and grows. He may also helps those around him grow as well. Essential characteristics:

Students now enter groups of four and are presented with a list of well-known stories and films. They categorize these stories based on their themes. I give them a list of stories and a literary theme worksheet: 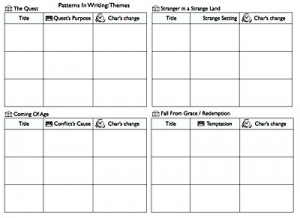 Naturally, you know which stories will work best with your class. They sort these into theme categories, giving an explanation of how the story fits with the theme. This would then be shared out and we would note any differences among groups. It is reasonable that one story could fit under multiple themes.

I give students an assortment of settings – pictures taken from Flickr’s most interesting photos of the week. Students pick one setting and a plot summary using one of the themes we introduces. This plot should follow the dramatic structure presented in the previous lesson.

This lesson has led to some incredible stories of redemption set on a volcano :)