Let’s look at character archetypes – an example of structure that will improve students’ narrative writing. This lesson is part of a unit on narrative writing built on the generalization “Structure increases creativity.”

An archetype, according to Wikipedia, is “an original model of a person, ideal example, or a prototype upon which others are copied, patterned, or emulated.” Character archetypes, like plot structure and themes, are juicy tool that will push yours students beyond setting, plot, and the main characters. It can benefit both their writing and literary analysis.

I’m using an inductive learning model, as developed by Hilda Taba. Students will start with unorganized examples of characters and then look for patterns. Often, those patterns will already start to reveal the character archetypes. But only in the very end do we unveil the term “archetype”.

First, present an assortment of characters that fit the archetypes you are introducing. Here’s a sample collection I used (obviously you’ll need to pick characters your students will be familiar with): 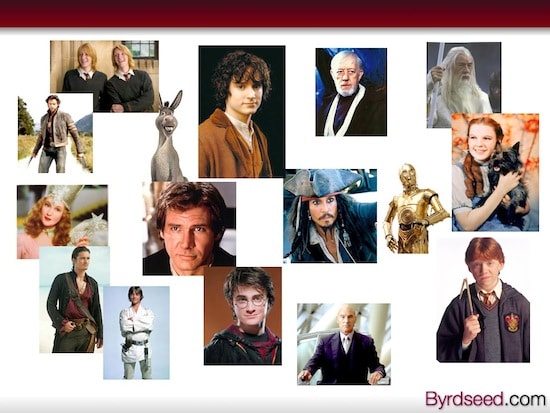 Note:_ I’ve carefully selected these characters to eventually teach about four archetypes (hero, mentor, rogue/pirate, and jester). In a true inductive lesson, your students would brainstorm their own characters. Regardless, I’m going to give my students freedom to categorize them as they see fit. Let this part proceed naturally. If no one ever comes close to the categorization you’re aiming for, you can always pop in after a while and suggest a category – not as a right answer, but as a way that you see the characters fitting._ Now, ask students to silently look for patterns in these characters. They should look for parallels based on character traits, not which story they are from.

Next, ask one student to pick two characters that go together. Note these characters using some kind of symbol (blue square, green sign, whatever). Your student should not explain 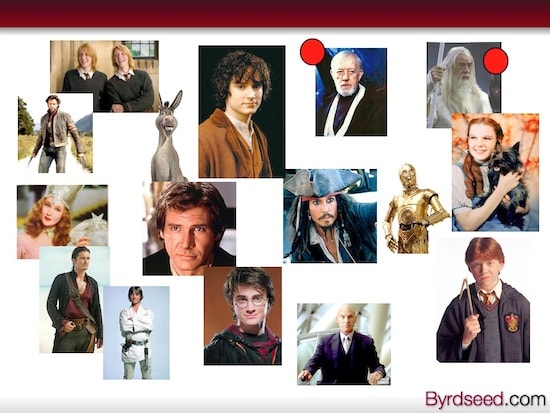 Here, a student has picked Gandalf and Obi-Wan Kenobi as a group and I’ve marked it with a red circle. It is essential to go with students ideas, this is a student-led model of instruction. Never say no to a student’s groupings (they’ll have a chance to back them up with evidence later).

Ask another student to create a new group of two characters, unrelated to the first category. 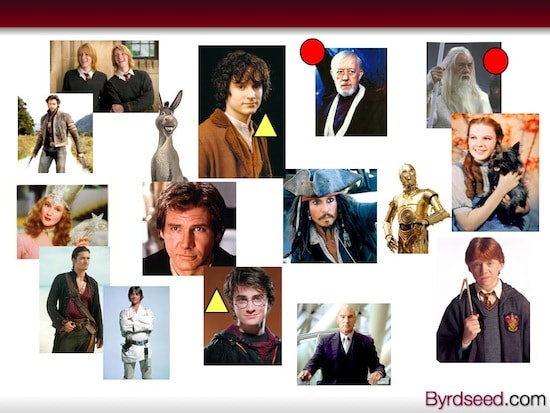 Here, a student has put Harry Potter and Frodo Baggins into a group. At this point, you might continue forcing new groups, or ask someone to add to an existing group. Note that we haven’t discussed why these groups are forming as they are, we will save that for later. Here are all of our characters mapped (as I would group them) 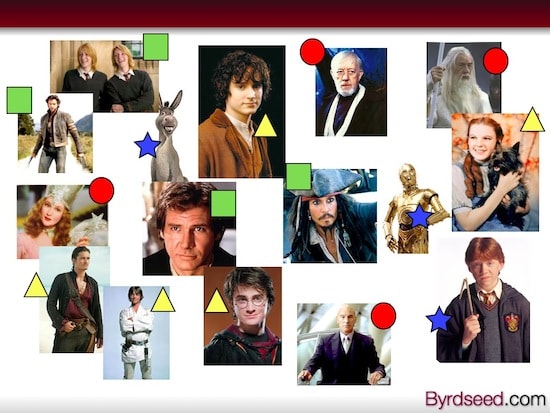 Before moving on, ask if anyone would switch a character into a different group. You might double-label a hotly debated character (in my image, I could see students putting George and Fred Weasley into a couple different groups). This is fine. This is real life. We’re trying to make sense of a bunch of details.

Now we ask for the idea behind the groupings. Call on a student to explain the attributes that the characters in the “red circle” group share. In this case, they might note that they are older characters who all posess some “magical” ability. Continue asking for commonalities.

As you reach the end of discussion, ask your students to name the group with a one-word label. Note the various options. Repeat for each group.

Now, if your group has gotten categories similar to the ones we’re after, congratulate them on identifying a college-level concept all on their own. Explain that they have grouped characters according to their character archetypes. Again, if your class never reached this conclusion on their own, you could restart the activity and start some categories on your own, scaffolding them towards the archetypes.

Remember to allow for freedom and self-direction, though. Give the expert’s definition of an archetype: “an original model of a person, ideal example, or a prototype upon which others are copied, patterned, or emulated” (again, taken from Wikipedia). In this example, I would then describe the four archetypes I put into the image and compare them to the students’ work.

Definition: The hero is a protagonist who begins as a humble, non-heroic protagonist. Examples

Include your students’ thinking in developing the examples. It will give them ownership and give you a window into their world.

There are many ideas on what makes an archetype, so feel free to move beyond these four ideas. I’ve included a list of my resources below.

Where To Go From Here? After the theme and plot lessons, students should have a working story. Consider asking them to include one of the archetypes from above. Here is a worksheet (pdf) you might use to have them brainstorm a character based on an archetype.

Head here to learn more about archetypes. There’s many more and their usefulness will depend on your students’ age.