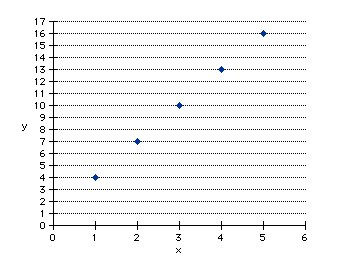 Although it’s not a 6th grade standard, I like to prepare my students for their future algebra careers by playing with linear and even quadratic graphing.

First, I don’t set this up as a direct instruction lesson. That wouldn’t be playing. Instead, I capitalize on my students’ ability to think inductively and recognize patterns. I try to set up a situation where they can construct their own meaning, since we naturally understand meaning we’ve constructed more deeply than that which we’re simply told.

In this lesson, I’m assuming you have intermediate level of familiarity with spreadsheets. It’s possible to do this with pencils and graph paper, but it’s far superior with access to some sort of graphing software, since students will spend more time playing and less time calculating. If you’re unfamiliar with the power of a spreadsheet, here’s a useful tutorial.

Briefly talk about how up until now we’ve focused on a single variable, which leads to only one correct solution.

I’d call attention to the fact that this equation is true for students with heights 1″ and 2″ as well as a pair of students measuring 6’10” and 6’11”. In fact, there are an infinite number of correct solutions. A graph helps us see what all of these solutions “look like.”

I would briefly explain the traditional T-Chart and have students build a graph of the equation y = x. In a spreadsheet, we would do this as follows:

And so on. Then I would have students graph this using the software. We’d see a straight line going up at a 45 degree angle.

I would then show students that they can modify the line by changing the equation to y = 2x. Students would update their spreadsheet and graph it (onto the same graph if possible).

Then analyze the changes. Students should note that this new graph is moving up more steeply.

Ask students to experiment and try to build a graph that is even steeper than y = 2x as well as a graph that is almost flat. In fact, make it a challenge to see who can make the “steepest” and “flattest” lines by modifying the equation.

After students play with this, issue a challenge to make the line slope down, like a slide (use the word “slope” but don’t introduce it formally yet.

Let them play with this until they start to find the solution. You might see one student figure it out, and then see the solution spread through the class with lots of “OHHHHH!”s. On the other hand, if they begin to get frustrated, push them in the right direction with some subtle hints.

Eventually, they should realize the need for an equation like y = -2x or a spreadsheet with this pattern:

Have students form a rule based on the patterns they’ve seen so far. Students should understand that multiplying x alters the steepness or “slope” of the line. The larger the value, the steeper the line gets and vice versa.

At this point, you can bring in the language of the discipline, and define “slope” formally.

The next day, point out that they discovered the pattern of multiplying x, but ask students to consider what happens when they add to x. Tell them to set up a spreadsheet like so and then graph it.

Issue a challenge to create three lines that “move” up the graph, and then create a line that is far below the original graph. Again, allow students to play, but be ready to guide them towards subtracting if they cannot get the line to “move” down.

Students should develop a rule to describe how adding and subtracting changes the graph.

To further explore linear graphing, students should try creating purely vertical and horizontal lines as well as lines that “move” left and right.

As you move through each level, ask them to continue adding to their rules about linear graphs. Remember to save the formal definitions for after they have played and developed background knowledge.

At the end of these inductive experiences, students will understand linear graphs more deeply than if you had assigned a series of typical graphing worksheets.

Math projects that cross disciplines, brain-busting math curiosities, and differentiated lessons that will get your students thinking.

Check out the Byrdseed.TV Math Archives!