Symbolism, a mainstay of literature discussion, seems too abstract and ephemeral to teach to younger students. However, with a well-constructed lesson and a plethora of examples, students will quickly get the hang of symbolic representation. We’ll finish this unit up with some great pixel-art and computer work.

I begin by taking off my wedding band and discussing it with my students. I ask them what it stands for.

Quickly we get some outstanding examples:

What if I lost my ring? Does that mean my marriage is gone? Is my love for Mrs. Byrd gone? Of course not! The ring is not actually love.

But many students know that a lost wedding ring could put me in some hot water. So a symbol has strong emotional connections to the idea it symbolizes.

Does a ring always symbolize love?

My favorite counter-example is the Ring of Power from Lord of the Rings. The Ring symbolizes quite the opposite: uncontrollable power. Anyone who obtains the ring becomes consumed by its unquenchable thirst for more power.

Next, I display an image of the Statue of Liberty. What does it stand for?

Then I ask if anyone has ever seen a movie or image with the statue destroyed or damaged. My 6th graders had tons of examples. We talked about how filmmakers use a damaged Statue of Liberty to show the destruction of liberty and freedom.

I use the classic image from Planet of the Apes to show how the Statue of Liberty symbolizes Earth and its destruction.

Students might also enjoy discussing the symbolism in flags or other national symbols.

Symbols do not have to be specific items. A desert is a common symbol, often representing difficulty. When we see a character in the desert, they are possibly going through a hardship or trial.

Bringing It Back To Characters

Throughout the year, we read stories that include symbolism. Hatchet‘s Brian owns a hatchet which symbolizes his hope to survive. Some students said it symbolized man versus nature. Nice!

Some quick symbolism from Pixar movies your students might be familiar with:

Our last topic of discussion is the symbols that represent computer programs. We discuss Firefox’s image of the globe surrounding by a fox. Safari is a compass. Keynote is a podium. Garageband is a guitar. 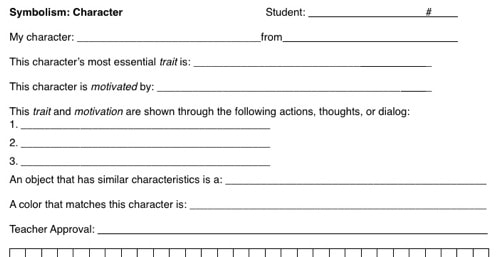 I explain that we are going to generate similar icons to represent a character. We identify a character’s main traits and their motivation. We think about the dialog, thoughts, and actions that show these traits and motivations.

At first, students might try to simply draw the character or an object they hold. This is not enough. We want a very abstract symbol.

Consider a simple story such as The Three Little Pigs. The straw pig demonstrates laziness. What other objects show laziness? A straw house is too literal. We want something abstract. A recliner? A bed? A can of soda and some fast food? Now we’re talking!

After students have identified suitable items, I let them start creating their pixel art. We use a small grid. This keeps non-artists in a nice rigid framework, and challenges artists to be creative within the framework. Plus, all kids (and many adults) love pixel artwork because of its connections to video games. 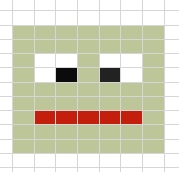 Naturally, our computers are too locked down to install any cool pixel art programs, so I repurposed Microsoft Excel. Students made square-sized cells and learned to change their background colors, in effect painting with a spreadsheet.

This could be done in the spreadsheet of your choice, including Excel, Numbers, and online with Google Docs.

Have fun and let me know how it goes!

Don't have time to create differentiated lessons? Byrdseed.TV is packed with pre-made resources to save you time (and delight your students). The Byrdseed.TV registration window closes on October 1st! Check it out. Check out Byrdseed.TV today!