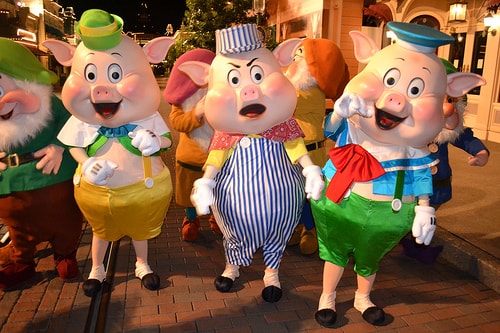 The addition of a single word can take students’ thinking to a new dimension. Those familiar with depth, complexity, and the content imperatives have experienced this. Dr. Sandra Kaplan, a creator of these tools, also developed a set of “key words” that are, unfortunately, nearly impossible to find online. My problem with these key words is that there are a large number of words, and their subtle differences lead to overwhelmed, confused kids. So I like to work with a small subset. My two favorites are: motivation and consequence.

Now kids are considering a deeper aspect of this simple story. Why did the pig act the way he did?

This question seems rather similar, despite the more advanced vocabulary. But let’s combine it with a prompt of depth for increased power!

What ethical consequences were there in choosing bricks?

Now you can get kids thinking in whole new directions: was there a downside to choosing the brick?

Some little genius might suggest the environmental impact of creating bricks versus using the easily renewable sticks and straw. Perhaps there is a negative economic effect of using bricks for a house.

Now students can evaluate the choice in a whole new light. And all we did was add a couple words to the question.

But these words aren’t just useful in literature response. Let’s see them in action in social studies.

These questions, while higher level, are still using “identify” as the thinking skill. Let’s super-charge this thinking with higher-level skills, such as “evaluate” and “create”:

You don’t need a masters degree in American History to develop these questions. You don’t need a weekend to create intricate prompts. A few minutes with a few simple tools leads to some great complexity.

And yes, I’ve started adding these into The Differentiator :)