One way to add depth to character analysis is to look beyond characters’ traits to include what has influenced them to have those traits.

Character’s influences could include:

When we ask students to go deeper, it’s essential to build scaffolding that leads to student success.

Rather than beginning with the complex idea of influences, start with the simpler approach of identifying characters’ traits.

Then, once students have identified a character’s traits, we can ask: who or what influenced this character to behave this way?

This kind of information is rarely on the surface, so give students some time to make these inferences.

Naturally, we always model the process for students first. Pick a character that your students are familiar with to dig into. This character could be from a story you’ve already read or someone from popular culture that your class knows about.

Luke is brave and willing to sacrifice himself for others. This trait is influenced by:

There’s a mix of people and events in this case.

You might create a graphic organizer like this to display the information (sorta a multi-flow map, if you’re familiar with Thinking Maps): 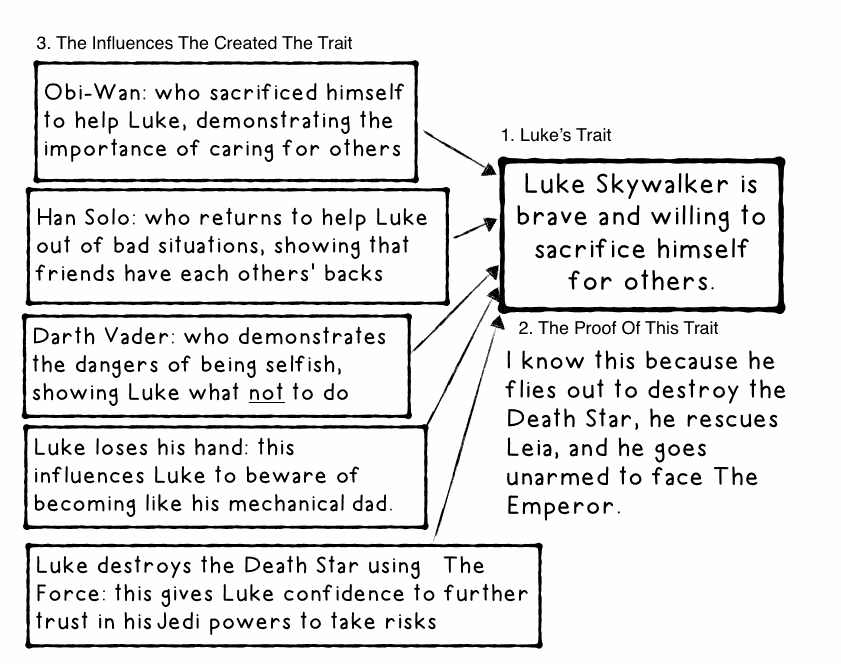 This has the wonderful bonus of connecting to students’ own lives. We can ask them about the people, media, and events that have influenced their own traits.

This could be a fun year-opener as students explain their most-essential influences.

Naturally, start with yourself:

Hope this becomes an interesting way to learn about your students while also taking character analysis to a deeper level. Let me know how it goes: ian@byrdseed.com!