In this series, we’re looking at patterns in writing. These patterns include dramatic structure, themes, character archetypes, and conflict.

Recall that this unit is framed with the generalization that “structure increases creativity.”

In this unit, we’ll be using a Frayer Model-style concept attainment with definitions, essential characteristics, and examples/non-examples to define each act of the plot.

My goal with these lessons is to equip my students with a sophisticated set of tools to write with. Writing programs tend to start and end with setting, character, and plot. By showing my gifted students the authentic tools of an author, they have a higher level to aim for in their writing.

Plus, it’s a blast reading your students stories as they integrate sophisticate plots, themes, conflict, and character archetypes.

“Students will identify the pattern of a five-act plot structure in story-telling using a variety of films, novels, and short stories.”

Refer to the unit’s generalization “structure increases creativity.” Often, authors use an existing structure to organize their plot.

People such as Aristotle noticed that great stories (whether by the Greeks, Shakespeare, or Pixar) follow a common pattern. They each contain these five acts:

Using these terms, we’re going to explore the plot of Finding Nemo.

1. Introduce language of the discipline “exposition”

Definition: In the exposition, the reader meets the protagonist and sees life before the conflict starts.

Essential Characteristics of the exposition:

Ask students to think from the point of view of the screenwriter: “How did the writer use the exposition to show the characters’ traits?”

Explain that the real plot hasn’t started yet. No one is trying to “find Nemo.” The conflict begins with an event known as the “inciting incident.”

In Finding Nemo, the conflict truly begins when Nemo is taken by the divers. This is known as the inciting incident. It is the origin of the next act, the rising action.

3. Introduce language of the discipline “climax”

Definition: The climax is the peak of the action. It could be a huge battle or an exciting action scene.

Example from Finding Nemo: The search for Nemo intersects with Nemo’s own adventures in the dentist’s office. The climax continues into the ocean, reaching its peak when Nemo rescues the fish trapped in a net.

Can you imagine if the movie simply ended in the middle of all the excitement of the climax? We would never know how the big battle turned out or if the heroes were all safe.

Definition: The falling action is a short but vital part of the story that resolves the climax.

Example: In Finding Nemo, this is when Nemo saves Dorie and Marlin learns to trust his son.

Non-Examples: The falling action should not leave the reader confused.

Definition The dénouement reveals how the charaacters have “changed over time.”

In Finding Nemo, the dénouement shows: 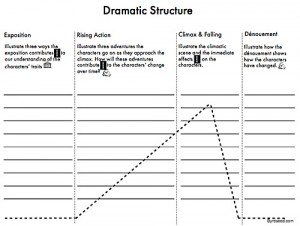 Break students into groups of four to participate in a practice session of identifying the plot elements of popular stories. I give a selection of choices such as: The Lion King, Harry Potter, Star Wars, etc.

I’m fine when groups use a story not on the list too. Each group should work with a different story. Groups analyze their story’s dramatic structure using a Freytag Triangle worksheet (pdf) and then present their work. These samples will go up as reminders and references.

Students will develop their own Freytag Triangle (pdf) based around an idea for an original story (perhaps one they’ve created as part of this unit).

Refer back to the unit’s theme: “Structure increases creativity.” Note the wide variety of excellent, creative stories that use this plot structure. Preview that students will be creating their own stories based around this pattern.

Byrdseed.TV features over a dozen videos to introduce depth and complexity, content imperatives, and frames to your students. Byrdseed.TV's registration window is now open. Browse the Depth and Complexity Video Resources.